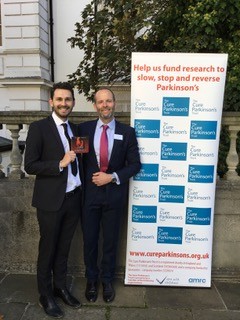 Ali was an inspiration to so many people and supporter of good causes, who sadly succumbed over many years of his life to the effects of Parkinson’s, but whilst never letting go of his essential soul and spirit.

Parkinson’s, sadly, is a neurological disorder characterised by tremors, stiffness, slow movement, and balance problems. It can also cause mood changes and sleep problems. The treatment of Parkinson’s has not significantly changed in the past 50 years. Cure Parkinson’s Trust, set up in 2005 by four people actually living with the condition, has since grown considerably and is focused on finding new treatments to slow, stop, and reverse its effects.

The effect of living with Parkinson’s was very much highlighted within a recent BBC documentary which focused on the detail of a groundbreaking clinical trial conducted over a five year period. The exercise, involving 42 voluntary participants, tested their response to the infusion of GDNF, a growth factor with capacity to halt the deterioration process by regenerating brain cells. To get GDNF into the brain cells that need it, a specially designed delivery system was developed. The participants underwent robot-assisted surgery to have four tubes carefully placed into their brains. This allowed GDNF to be infused directly to the affected brain areas with pinpoint accuracy, via a port in the side of their head.

The complete test results have opened up some important insights, and Cure Parkinson’s Trust is currently working closely with the lead investigators to map out the next steps in this highly significant and also complex avenue of research. At the same time, the Trust is funding clinical trials of other potentially disease modifying drugs, doing all it can to open up new areas of investigation with a view to developing a range of approaches for every individual with the Parkinson’s condition.

All of this is highly significant bearing in mind that within the UK there are now 145,000 people living with Parkinson’s, and as many as 10 million worldwide. Many of these people are being diagnosed much younger and, having regard to its effect on family members and others offering care, is very widespread throughout society.

Our Just Giving page can be found at http://www.justgiving.com/Michael-Judkins2. Many thanks indeed to everyone for their support.