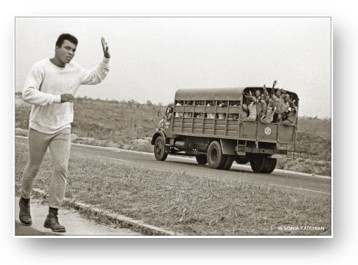 Whilst to the best of my knowledge “Float like Butterfly” is unique in being the first musical work with Muhammad Ali as its subject, a great deal has appeared over the years by way of books, films, and other documentary material. I have prepared this page in order to highlight three such works in particular, which in their separate ways give very well made, interesting, and indeed invaluable insights into Ali’s life and career.

To mention briefly just four of those additional items well illustrates how diverse have been the approaches taken to the subject of Ali. In 2001 we had the motion picture called “Ali” starring Will Smith in that role, an excellent movie although arguably the life events not yet sufficiently complete. 2004’s “The Soul of a Butterfly” took the form of a simply-worded version of Ali’s story written in the first person, with assistance from daughter Hana. In 2016 I read of the astonishing random encounter with Ali leading to long-term friendship on the part of author/journalist Davis Millar in his book “Approaching Ali’,  Davis also that same year bringing over to the O2 Arena in London the superb “I am the Greatest“ exhibition from Louisville. Then most recently, and coinciding with the anniversary of his passing in June 2017, a highly entertaining BBC TV documentary devised and presented by another huge Ali admirer, the inimitable Frank Skinner. 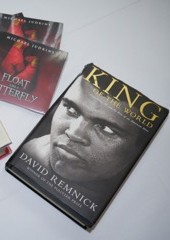 Subtitled “Muhammad Ali and the rise of an American Hero” the author, an established sportswriter and then editor of the “NewYorker”,  rather than attempt a full life and career history to the stage of writing, instead focuses his attention on the early years, largely going up to the second Liston fight in 1964. By concentrating on Ali’s ( then Clay ) upbringing and rise to fame, as well as the pivotal civil rights issues and fundamental influences upon his life of Elijah Muhammad and Malcolm X, the perspective as conveyed by this book enables it to go beyond its forerunners. It also represented at the same time a very useful source of ideas and factual content for my writing of the “Float like a Butterfly“ opening songs.

So much is packed into this production, which, rather than being structured in a purely chronological manner, tells virtually everything of interest about Ali and his life by way of diversified but substantial contributions, one following another, from many if not most of the people the viewer would wish to hear from, with accompanying footage. Those appearing include daughters Hana and Maryum, son Muhammad Jnr, ex-wife Veronica, together with a succession of individuals from the sporting and boxing world, particularly prominent amongst whom are manager Gene Kilroy, career-long trainer Angelo Dundee, and the mighty rival George Foreman. Even Sir Tom Jones makes an appearance, relating his knock-down of Ali –  thought by some fans at the time to be a serious capitulation rather than light-hearted “playing to the audience” – at his Deer Lake training camp.

Fantastic insights ( especially into the background of Ali’s Vietnam draft refusal ), great photography, a defining documentary if ever there was one. 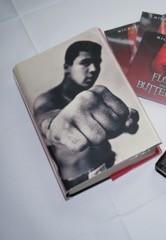 The only written work to date since Ali’s passing and as comprehensive and well-researched a biography as is likely ever to appear. Meticulous in its chronology and facts, the narrative is always easy to read whilst maintaining immaculate journalistic quality throughout. The author, previously known mainly for his accomplished career at the Wall Street Journal, gives a fascinating initial appraisal of the Clay family history, enabling an understanding of Ali’s numerous subsequent references to the abandonment of his “slave name”. He then goes on to incorporate the detailed background to the American civil rights movement, emergence of the Nation of Islam, and Vietnam war, more informatively than is possible to imagine within any other work of this kind. Remaining at all times well balanced and even-handed, Jonathan Eig’s book is refreshingly realistic, where necessity requires, as to Ali’s shortcomings and provides a major insight ( along with some convincing evidence ) into the coincidence between his repeated reluctance to countenance career retirement and gradual but ultimately serious premature physical decline. All in all, a captivating and utterly scintillating read –all 542 pages!