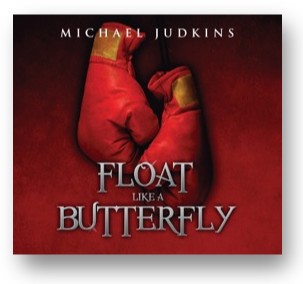 “Float like a butterfly” is a musical appreciation of one of the most popular and unique sportsmen of all time – and one of the most well remembered characters by those living through the heady days of the 1960s and 1970s. Muhammad Ali was born on 17 January 1942, the opening track of the same name moves on to “Louisville”. This is the city where, against the acceptable face of second class citizenship bestowed upon the black man, Ali’s boxing talent came to the fore. “Neat fighting man” charts his development through the shaping of that talent as a young teenager, the Olympic gold at Rome in 1960, to the fateful day for world champion Sonny Liston of 25 February 1964 when the young pretender Cassius Clay fought with the style and confidence which would continue from then on,

The title track represents that undefeated period which followed, and his adoption from an early stage of the name “Muhammad Ali” synonymous with his membership of and commitment to the black Muslim cause, which the watching public may have initially misconstrued as a gimmick or passing phase.

“Our ‘enry” – a diversifying insight into perhaps the most revered of all our British boxers, a mutual respect with Ali being unfortunately where similarities ended.

Ali’s rise and subsequent achievements were played out against the background of a difficult and much criticised U.S. military involvement in Vietnam, into which many ill-prepared young man were drafted.

“Unwinnable war” sets the scene against which Ali, standing firm in defence of principle, faced the inevitable sanction for defiance of that draft. No longer champion at the age of 25, the loss of Ali’s title was widely regarded as by his own hand,. Part One ends with  “Taken the distance”  – a distance which seemed now to have been completed.

The inactive period which invariably followed is represented by “Interlude”.

1970 – three years on.  – Ali has kept in shape. Attitudes were changing, and eventually amidst ongoing Court proceedings, his boxing licence was returned. A comeback was heralded but there were differences, not least an organisational restructure at world heavyweight level, where “Smokin’ Joe” Frazier had now assumed the mantle.

“Fight brave and free” takes in the early stages of Ali’s patient and disciplined, rather than spectacular, return to the professional ring., to the bizarre and inconclusive contest with Frazier the following year. Ali remained a challenger, although his next attempt to win back what had been taken from him in 1967 did not take place until 30 October 1974, seven years later. “Kinshasa” tells the story of that momentous occasion, innovatively staged in a warmly welcoming black African republic, through the eyes of a then spectator, now locked into middle age, and sentimentally recalling a chance life experience the like of which she is unlikely to see again. George Foreman, defending champion, the odds-on favourite, the rest is history.

Whilst Ali was to go on to lose the crown and then regain it a second time, the glory years have now been reflected. “The Islam nation” offers an overview of the faith embraced by the man – a faith as with many which does not escape scrutiny from the perception of inconsistency.  “I still can see the man” is Ali in his final years – a man whose contentment and personal maturity sat alongside the onset of Parkinson’s syndrome, which both his family and faith helped him to come to terms with. ”Muhammad Ali – reprise”  – the appraisal complete, the journey has ended.